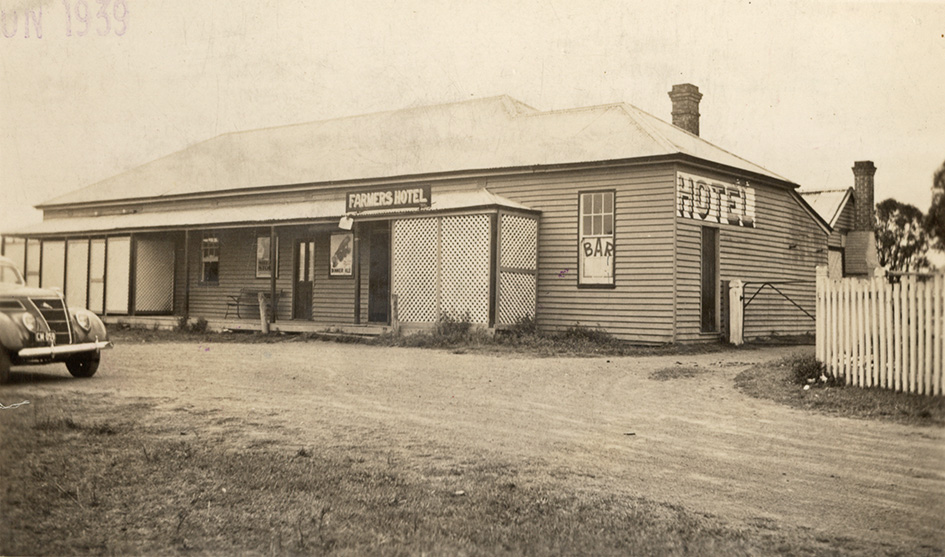 The Farmers Hotel (Formerly the Half Way House Inn)

The Half Way House Inn at Vacy was built and owned by Gilbert Cory. It was located at Clarke's Crossing of the Paterson River, which was just to the east (downstream) of the current Vacy Bridge. It was licensed to Thomas Cordell in April 1858. Cordell held the licence until it was transferred to John Beattie in April 1864. In June 1866 the licence was transferred from Beattie to John Crotty who held it until 1880.

It is thought the hotel may have closed for a while, as the Maitland Mercury reported in 1880 ... "Mr. Johhny Bluford has just taken and re-opened that well-known hostelry at Vacy known as the Half-Way House Inn". John Bluford (Blueford) held the licence until 1896 when it was transferred to Bernard Higgins. The hotel was destroyed by fire in November 1896 but continued to trade in temporary premises nearby.

Higgins rebuilt the hotel away from the old river crossing road, on the site where it stands today, and the new premises opened in June 1897 as the "Farmers Hotel". He held the licence until 1899 and by 1900 it was licensed to David Simmons. The Farmers Hotel at Vacy continues operating today.

The spot where Vacy Bridge now stands was known as "Clarke's Crossing" in the 1800s, prior to establishment of Vacy village. It is named after Richard Clarke, an ex-convict who was leasing part of John Cory's Vacy estate by 1830. At Clarke's Crossing a track led down to the Paterson River from both sides so people and livestock could simply wade through the river.

In 1851 tenders were called for construction of a bridge at Clarke's Crossing but there were no takers. Tenders were called again in April 1859. Finally, after many delays and great anger by residents at the slow progress, the bridge was built and in use by early 1861.

The bridge was badly damaged in a huge flood in May 1861. Much of the river bank was washed away and two piers were lost. The bridge platform sank in the middle and the bridge was closed. A year later, in May 1862, it was slowly being repaired.

In December 1896 the Vacy Bridge was destroyed by fire, leaving the original Clarke's Crossing as the only way to cross the river. In 1897 plans were drawn up for a replacement bridge. The second Vacy Bridge, an Allan timber truss design that still stands today, was completed in May 1898. 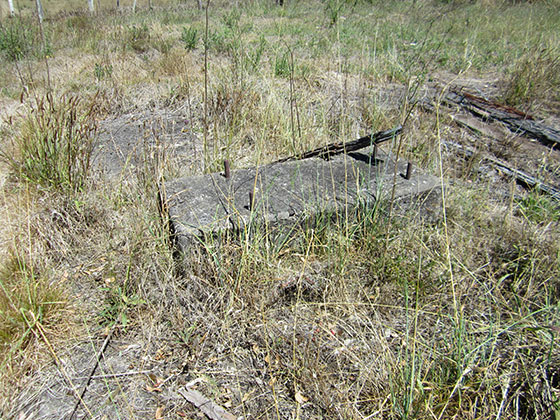 By the 1890s dairying was an important part of agriculture in the lower Hunter Valley. Tobacco production had all but disappeared due to disease and reduced market prospects while much of the area's wheat and sheep production had moved inland as pastoralism expanded west of the ranges where the climate was more suited to these enterprises. That left dairying, horticulture, beef and pig production as key enterprises in the lower Hunter.

In 1878 Gustaf De Laval in Sweden invented the first practical machine to separate cream from milk (although he did not invent the idea). De Laval's was the first centrifugal cream separator in which milk flowed continuously and was spun and the cream separated as it moved through the machine. The cream flowed out continuously through one spout and the skim milk through another.

In 1882 the Fresh Food and Ice Company, established by Thomas Mort in 1875, imported two Danish separators for its factories at Mittagong and Darling Harbour, the first separators to be brought into Australia. They were large, steam-powered models designed to be used in factories or creameries rather than on individual farms. Creameries were so named because they only separated cream but did not make butter and cheese on-site whereas factories did both.

The first creameries in the lower Hunter were established at Osterley in April 1892, Eagleton in September 1892, Millers Forest in October 1892 and Vacy in December 1892.

Establishment of the Vacy Creamery

In September 1892 a group of farmers met at Vacy to discuss the establishment of a creamery and from there things moved quickly. Mr JB Albion financed the creamery as its owner while Mr Gilbert Cory of Vacy provided a piece of land at a nominal price. In today's terms the site was just over Vacy bridge on the right as you drive north. The concrete foundations are still visible as shown on the google earth image at right.

William Keppie and James Oldfield were awarded the contract for its construction. The creamery was opened on 18 December 1892 and part of the Maitland Mercury's report is as follows: 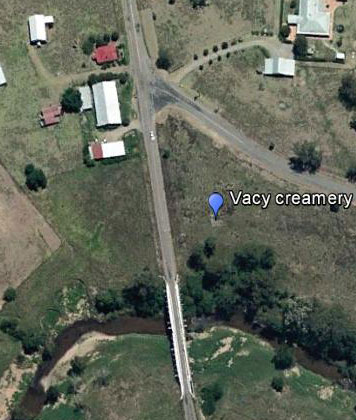 The dimensions of the building are 35 feet by 16 feet, and 13 feet high. The boiler room is 10 feet square, and the boiler of 6 horse power, and the engine is of 4 horse power. The two separators are capable of holding 180 gallons of milk. There is also a reservoir for heating milk. The receiving tanks allow for weighing 120 gallons of milk at a time. A windlass is arranged to draw the milk from the carts, and the water required is pumped up from the river, near which the creamery is situated.

Creameries were almost always two storeys high so carts could drive underneath where the milk cans were hauled to the top storey by block and tackle (or steam winch in larger factories). Here the milk was weighed then fed by gravity into the separators where the cream and skim milk flowed into different containers. Like all these small district creameries, its life was short due to technological changes, the first of which was the rapid uptake of small, affordable, hand-powered separators on farms in the late 1800s and early 1900s.

The Vacy Creamery closed permanently in September 1899. A complete photo of the Vacy creamery has not been found.